Towerfall (Crossover)
Madeline is the main protagonist of Celeste.

Madeline is a short, young Canadian woman with pale skin, brown eyes, and long auburn hair with one wayward curl. Throughout the events of the game, she wears an aqua snow jacket, dark grey pants, black and dark grey walking boots, and her brown climbing backpack equipped with a red sleeping mat and plastic water bottle. In her official art, she is shown reaching for a strawberry with wings. According to Celeste's developers, Madeline is transgender.[1]

Madeline is shown to be strong-willed and determined yet heavily conflicted, climbing the mountain to spite herself. Her courage is noted by other characters, some even berating her and calling her foolish, warning her to turn back before she gets herself hurt. Still, she presses on, determined to drive out unwanted thoughts from her own mind and take control of her life even when it's pointless and harmful.

Prior to the Story

There's little we know about Madeline's past, but we do know that she was born as a male and transitioned to female sometime before the game’s events. She comes to Celeste Mountain to challenge herself and to find motivation in her actions by reaching the summit of the mountain, despite both her own problems and the dangers of climbing the Mountain.

Madeline mentally encourages herself to continue on her journey before entering a snowy area. After passing a few challenges with the help of a Bird (who teaches Madeline how to climb), Madeline encounters an Old Woman, who Madeline gets directions to Celeste Mountain from. Before Madeline leaves, the Old Woman warns Madeline that Madeline might not be ready for Celeste Mountain, but Madeline dismisses the Old Woman as crazy and leaves. Immediately afterwards, Madeline tries to cross a bridge which collapses as she runs across it, causing her to begin to fall. However, the Bird teaches Madeline how to dash before she falls, allowing Madeline to reach solid ground. Madeline then encourages herself again as the level ends.

Madeline travels through the titular Forsaken City, finding another hiker, Theo, about halfway through the level. Madeline and Theo converse, and Theo explains that he came to Celeste Mountain to explore and to take pictures, although Madeline avoids explaining why she came to Celeste Mountain. The two also discuss the origins of the Forsaken City, with Madeline explaining that a mega-corporation started building the city, but nobody wanted to live there, although neither of them know why. Madeline also expresses a desire to reach the summit of Celeste Mountain, something that Theo does not seem as interested in doing. Eventually, Madeline returns to climbing Celeste Mountain. At the end of the level, she encounters a memorial (entitled the Celeste Memorial), decides to stop there and make camp for the night, and goes to sleep, thinking that climbing Celeste Mountain might have been a mistake.

Madeline awakes to find that several mysterious changes have occurred to her surroundings: the flames of the campfire that she lit before she went to sleep have turned green, blue lights are descending from the sky, and the text of the Celeste Memorial is now re-arranging itself at random. Madeline then leaves the Celeste Memorial and starts exploring the surrounding area.

After a significant amount of exploring, Madeline encounters a large mirror. As she passes by it, she sees in it a reflection of herself with various features changed (the reflection has purple hair, white skin, and red eyes). Madeline stops after passing by the mirror and walks back over to it, where she again sees this distorted reflection. The reflection then walks over to in front of her, breaks out of the mirror, and runs away. After this occurs, several non-interactive blocks in the level transform into Star Blocks. Using these Star Blocks, Madeline continues to explore.

After an intense chase, Part of Madeline stops chasing Madeline and disappears, laughing. Madeline continues running until she encounters a pay-phone, which she observes to be ringing. After some hesitation, Madeline picks up the payphone, and is answered by a green-haired boy, who she has an increasingly confusing conversation with. After revealing that he knows that Madeline is calling from a payphone, the boy insists that Madeline called him. Madeline then reveals to him what has just happened to her over the course of the chapter, but he insists that she's making all of it up. As she tries to reveal more of her experiences to him, she realizes that she's dreaming, which he confirms, then gives her more evidence to believe that she's dreaming. Part of Madeline then appears in front of Madeline, telling Madeline that it's time for her to give up and go home, after which the payphone transforms into a giant monster and eats Madeline.

Madeline wakes up to find herself back at the Celeste Memorial, where everything has returned to normal. Madeline then encounters Theo, and they converse briefly. Madeline then continues until she finds the payphone again; she uses this to call her mother, who tries to help Madeline calm down.

Madeline continues her journey up the mountain, but her path is blocked by the "world renowned" Celestial Resort. The hotel owner, Mr. Oshiro, offers to allow Madeline to stay in the presidential suite, but Madeline isn't interested in staying.

Madeline sees that the hotel is an absolute mess, and helps Mr. Oshiro clean up most of the junk in the hotel, despite Mr. Oshiro insisting that the staff will take care of the situation.

Upon finally arriving at her room, Madeline once again states that she isn't interested in staying. Badeline shows up, and taunts Mr. Oshiro before telling him that Madeline is just helping him to "fuel her twisted ego", angering Mr. Oshiro and causing him to chase Madeline across the roof. Mr. Oshiro eventually calms down at the end and tells Madeline to leave him alone, allowing her to continue her journey up the mountain.

After leaving the Hotel, Madeline encounters the Old Woman on her way. She warns the protagonist about incoming dangers and that it may be a good time to give up. Madeline decides to continue her journey regardless.

At the end of the chapter, Madeline and Theo meet at a gondola leading over a massive ravine. Despite Madeline's doubts about its safety, they decide to ride it. The further they were going, the more impatient and scared Madeline starts to be. Theo realises it and tries to cheer up Madeline by making a selfie with her. Shortly after that, Badeline appears and the gondola starts to malfunction, causing the protagonist to have a panic attack.

At the end of the gondola ride, Madeline and Theo arrive at the Mirror Temple. Madeline warns Theo that it might be dangerous inside, but he ignores Madeline's warning, and immediately heads in to take pictures. Later on, Madeline discovers that Theo got trapped inside a mirror while attempting to take a mirror selfie.

Partway through this chapter, Madeline finds a large mirror, which she enters in an attempt to find Theo. Inside the mirror realm, she encounters Badeline again, who gives her information about the temple as well as telling her that she deserves all this. She also encounters seekers, which are fish-like monsters which attempt to kill her by dashing into her.

She later finds Theo trapped in a crystal, and subsequently carries him out of the temple.

After the escape, Madeline and Theo decide to rest by a campfire and talk about their reasons to why they've decided to climb the mountain. During the conversation, Madeline explains him that a part of her has escaped from a mirror and keeps haunting her. She also reveals that she's been struggling with anxiety and depression for a very long time, and that climbing the mountain might be a way to challenge herself. She also tries to think about a way to fight against Part of Herself. They later decide to take a selfie as a way to remember the night and go to sleep.

Later, Madeline wakes up to talk with Badeline. She decides that she doesn't need her anymore and sets her free. Badeline, scared about being abandoned, grabs Madeline and causes a panic attack. The protagonist tries to calm herself with the feather technique from before, but it gets cut in half and she falls all the way down into a deep water cavern.

Lost in the depths, Madeline starts to lose hope and is angry at Part of Herself that she caused her to fall all the way down. After wandering around, she finds the Old Woman who thinks she may have given up on her journey. Even though she didn't manage to climb to the summit, she doesn't want to get over the failure. The Old Lady advices her to talk to Badeline and find out what her fears are.

Madeline decides to find Part of Herself and when she manages to do it, she decides to apologise for her behavior and starts encouraging her to work together. Badeline doesn't trust her and they start to fight. Once it's over, Madeline decides to comfort her and they fuse together into one person, gaining an additional dash. They eventually start climbing up end meet their friends on the way.

Once Madeline has reached the summit, they decide to enjoy the looks for a while. Later, they slowly go back to home and meet her friends at home. Shortly after, Mr. Oshiro appears who seemed to be informed by a bird that showed him the way. After that, Madeline decides to bake a pie for them and the result will depend on the amount of strawberries a player has collected.

The Old Woman calls Madeline to meet her at the Core entrance. When the player hasn't collected enough hearts, she tells her that Madeline may not be ready to enter the area. If the heart gate opens, she decides to explore the place in order to find the Heart of the Mountain.

Madeline discovers that Granny has died and apologises to her for not appearing at her funeral. Later she follows the bird around believing that it is part of Granny and will lead Madeline to Granny. Badeline discourages her to proceed and tells her to wake up, but the protagonist assumes that she doesn't want to see Granny again and proceeds to go without her.

After attempting to catch the bird several times, it escapes and Madeline starts to lose hope that she may find the Old Woman again. Badeline appears and tries to calm her down, encouraging her to wake up, that they will face this together. Madeline disagrees and feels guilty that the bird is trapped because of her. They both decide to release the bird from the collapsing dream world.

Once they've saved the bird, she eventually encounters Granny at the end and thanks her for everything she's done for her. Later, Granny disappears and Madeline wakes up shortly afterwards, showing that the entirely of Chapter 9 was a dream. She proceeds to video call Theo, where he reveals that his grandfather was friends with Granny and they "shared the mountain together".
Show/Hide Content 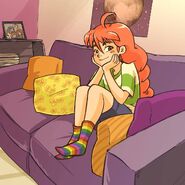 A picture of Madeline's family, as seen in the background in one of Theo's Instagram pictures 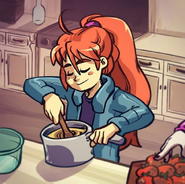 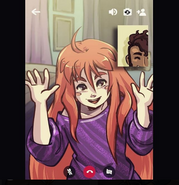 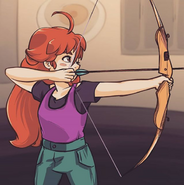 Madeline engaging in her new archery hobby, in preparation for the Towerfall crossover 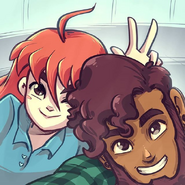 Madeline and Theo taking a selfie

Madeline as she appears in Towerfall
Français
Community content is available under CC-BY-SA unless otherwise noted.
Advertisement