Chapter 3: Celestial Resort is the third chapter of Celeste. This chapter features a variety of new objects, as well as the introduction of Oshiro, a new and important character to the story. Chapter 3 runs the player through a run-down hotel, and they are tasked with helping Oshiro (the hotel's owner) clean it up. But something mysterious and ominous lurks...

A hidden room can be found in this sub-chapter, containing a computer that allows the player to play the PICO-8 version of Celeste.

The crystal heart is located in the second sub-chapter, Huge Mess.

Exploration of the hotel will reward players with the B-Side of the level, featuring the Good Karma mix by Christa Lee. This song is also featured in this level's C-Side, unlocked after beating The Core's B-Side.

Chapter 3's B-side consists of 4 sections: Start, Staff Quarters, Library, and Rooftop. It includes all the same objects from the respective A-Side, with the exception of Water, Smashable Walls, Platform-Rearranging Buttons, and Locks and Keys.

The C-side for the chapter is very similar to the A and B sides. However, the last screen requires the player to bounce on Mr. Oshiro's head for much of the section, a mechanic largely exempt from the A and B sides.

Madeline finds a decrepit hotel, then bypasses animated globs of slime to gain access to the hotel's front door. Upon entering the hotel, Madeline finds an old and damaged guestbook with ominous glowing comments. Madeline then rings the bell at the front desk, summoning a ghostly figure. Madeline is shocked by the presence of a ghost, but he assures her that there's nothing wrong, presenting himself as Mr. Oshiro, the Celestial Resort Hotel's concierge. He assumes that Madeline will stay at the hotel, but Madeline insists that she's just passing through; Mr. Oshiro, refusing to believe that Madeline is leaving, begins escorting Madeline to the hotel's presidential suite, hoping that it will convince her to stay at the hotel.

As Madeline follows Mr. Oshiro through the hotel, Mr. Oshiro becomes increasingly flustered by Madeline's comments on the poor state of the hotel, eventually leading him to lose hope due to the hotel's large amount of clutter. Madeline decides to stay behind to help Mr. Oshiro clean up the hotel. In the process of doing so, Madeline encounters Theo, who distrusts Mr. Oshiro and wants for Madeline and himself to leave through a nearby air vent; Madeline refuses Theo's offer, thinking that she can get through to Mr. Oshiro and help him, so Theo leaves by himself.

Eventually, Madeline manages to clean up the hotel, although she becomes annoyed by Mr. Oshiro's attempts to make her feel like the hotel's service level is high enough that her efforts are unnecessary. Mr. Oshiro then takes Madeline to the hotel's presidential suite in a desperate attempt to keep her as a guest, but the two become separated when Mr. Oshiro has a breakdown in front of the suite's entryway and inadvertently clogs up the passage between Madeline and himself with globs of slime, forcing Madeline to take an alternative route to catch up with Mr. Oshiro. On this alternative route, Madeline encounters Mr. Oshiro's decades-old diary, the final entry of which details Mr. Oshiro's refusal to part with the hotel when it closed at around the time that the diary dated to.

Madeline finally arrives at the presidential suite. There, Mr. Oshiro worriedly tries to win her over with the suite's amenities; Madeline indicates somewhat facetiously that she likes the suite, but can't stay despite the suite's niceness. Mr. Oshiro argues with Madeline, trying to keep her there, until Badeline appears in the presidential suite's mirror, breaks out of the mirror, and severely reprimands Mr. Oshiro for trying to make Madeline stay there when the hotel was low-quality. Madeline tries to console Mr. Oshiro, but he becomes angry and tells her and Badeline to leave, which they do (made possible by Badeline breaking a hole in the ceiling).

At the rooftop's edge, despite Madeline's frightened pleadings, Mr. Oshiro destroys the awning that he and Madeline are now perched on, sending the two down to the hotel's back exit on ground level. Mr. Oshiro, now back to normal, decides sadly to close the hotel for repairs. He then leaves, asking Madeline to leave him alone; after slight hesitation, Madeline does this, continuing on her journey.
Show/Hide Content

Madeline: Just breathe, Mr. Oshiro. Breathe.
​ Madeline: It's just a little spring cleaning.
​ Madeline: Well, more than a little...
​ Madeline: But I can help!
​ Oshiro: You're too kind.
​ Oshiro: But I wouldn't even bother.
Oshiro: It's a lost cause.

Madeline: If I disappear now, Mr. Oshiro could have a meltdown.
​ Madeline: And maybe I can actually do something good. For once.
​ Theo: Forget about your karma, dude.
​ Theo: I think that guy is going to melt down no matter what.
​ Theo: You have to think about your safety.
​ Madeline: Theo. I'll be okay.
​ Theo: Yeah yeah. I didn't expect you to listen.
​ Theo: See you on the outside, jailbird.
​

Heavydamage's Resort C 22 was, at one point, the longest standing world record in all of Celeste. It was eventually surpassed by Glackum's Core A 4:07.

An interesting feature of 3A is shaftskip. This uses a pixel-perfect demodash to clip through a wall of dust bunnies, saving about 12 seconds. This works because the demodash reduces the vertical extent of Madeline's hitbox such that it becomes possible to fit between the hitboxes of the individual blob spike objects. This is possible with most blob spikes in the game, but because it is pixel-perfect and nowhere else does it save anywhere near as much time, shaftskip is the only instance of this trick being viable in full game runs. It has been used in the tape room of 3B, however, and is conjectured to be viable in a few other levels (mostly C-sides) as well but has not been successfully applied in those. 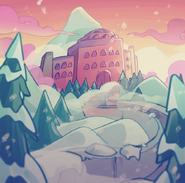 Mr. Oshiro at the end of Chapter 3
Community content is available under CC-BY-SA unless otherwise noted.
Advertisement