Chapter 1: Forsaken City is the first chapter proper of Celeste (although it is technically preceded by the Prologue). The chapter introduces many of the primary game mechanics and collectables, including acquainting the player with the dash maneuver and introducing both normal and winged strawberries. It also introduces several objects to the game, detailed below. Additionally, this chapter introduces one character: Theo.

The Crystal Heart for the chapter is located here.

All objects in Crossing. Does not introduce new objects. The B-Side Cassette Tape for the chapter is located here.

The crystal heart is located in the second sub-chapter, Crossing.

The B-Side includes three parts: Start, Contraption, and Scrap Pit, the last of which includes Skull Binoculars, which are not found in the regular version of Chapter 1. The C-Side includes everything from the normal version and the B-Side of the chapter, as well as two objects that are not in the rest of the chapter: Shields and Shield-Activated Platforms.

Forsaken City is the only A-Side that features a hidden secret that can only be found if the player decides to finish the entire chapter without dashing even once. In order to complete this challenge, players need to abuse the game's lenient hitboxes and "coyote frames" in order to perform very tight and difficult jumps. The player also has to learn a technique called "neutral jumping", which will be needed in a few sections towards the end. If the player manages to complete the chapter without dashing even once, a flying Golden Strawberry will appear on the last screen.

Unlike all other Golden Strawberries, the player doesn't have to complete this chapter without dying in order to get it.

Madeline travels through the titular Forsaken City, finding another hiker, Theo, about halfway through the level. Madeline and Theo converse, and Theo explains that he came to Celeste Mountain to explore and to take pictures, although Madeline avoids explaining why she came to Celeste Mountain. The two also discuss the origins of the Forsaken City, with Madeline explaining that a mega-corporation started building the city, but nobody wanted to live there, although neither of them know why. Madeline also expresses a desire to reach the summit of Celeste Mountain, something that Theo does not seem as interested in doing. Eventually, Madeline returns to climbing Celeste Mountain. At the end of the level, she encounters a memorial (entitled the Celeste Memorial), decides to stop there and make camp for the night, and goes to sleep, thinking that climbing Celeste Mountain might have been a mistake.
Show/Hide Content

Note: World records prior to 12/2/2018 have been omitted due to extremely fast turnover. UltraMarlin's 58.1 was briefly the record on 23/10/2019 when Zkad and FPlush deleted their PBs, however, Zkad's 55 was quickly reinstated.

Theo's 'reason' for climbing the mountain 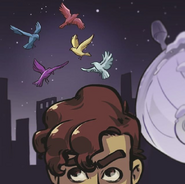 Theo's selfie with the birds, who were trying to tell him something, a.k.a the birds in the Crystal Heart room

Madeline resting at the base of the mountain, in a Chapter Complete screen
Community content is available under CC-BY-SA unless otherwise noted.
Advertisement